In March of 1958, a very caring man dragged a lost man, Bobby J. Barnett, into a church in Arkansas. After listening to this caring man telling him about how God loved him, Bobby responded by trusting Jesus. That night Bobby accepted Jesus as his savior and his life changed dramatically. It was never again the same. After a short period of time, Bobby knew he had been called to the ministry full time. Next came years of education, marriage and children, and even more education as he responded to the call of becoming a pastor.

The first official meeting of the future Chariho Southern Baptist Church was a prayer meeting held in the home of Mrs. Edith Naylor on Rockville Alton Road. Present at that meeting were Edith Naylor, Andy Tabak, Hazel Bailey, Maureen Palmer, Ernie Boss, Eric DelSanto, Mary and Bobby Barnett. The prayer was for direction from Almighty God on when and where to start the official Sunday services of the church. They decided to use the name CHARIHO, after the school district, which serves the areas of Charlestown, Richmond, and Hopkinton. The mission started with Sunday service December 16th, 1973 in the Gordon Green American Legion post with 56 present. The church was officially incorporated on January 3, 1974, @ 4:00 pm in the law office of F. Thomas Lenihan. Present at that incorporation service were Edith Naylor, Maureen Palmer, Blanche Hill, Mary and Bobby Barnett. The Chariho Southern Baptist Church was officially constituted on March 31, 1974, with 42 charter members. The Rev. Jack Schneider preached the constitution service. As a church, the first prayer meeting was held in the home of Elwood and Hazel Bailey on April 10, 1974, and the first business meeting with a treasurers report was held in the Bailey home on April 17. 1974. Services were terminated at the American Legion Hall on May 26, 1974, and from there the church moved to Pastor Barnett’s front yard in Bradford for the next 3 weeks. On June 23, 1974, Sunday and Evening worship services were moved to the Chariho High School in Richmond.

On May 6th, 1975, Ms. Evelyn Johnson gave Chariho Southern Baptist Church 9 and 1/4 acres of land valued at $45,000 on Alton Bradford Rd. On August 3rd, 1975, the church received an anonymous check in the amount of $17,626.55 for the building fund and to this day Pastor Bob still does not know who donated that money but always said: “God provided”. On June 13th, 1976, groundbreaking ceremony was held on the church land, and the church and parsonage were started. Workgroups came from Alabama, Arkansas, Mississippi, North and South Carolina, Georgia, Virginia and West Virginia to donate their time and help on the building. Many offerings and donations were made, including the communion table, pulpit, and chairs by the workgroup from Mississippi. Pews were purchased from a church in Monette AR, and hymn books were donated by family and friends. On May 21st, 1978 members moved from the high school to the present building. From a human standpoint, the Chariho Southern Baptist Church owes a debt of gratitude they will never be able to repay to Mrs. Evelyn Johnson, Elwood Bailey, and David Kenyon. 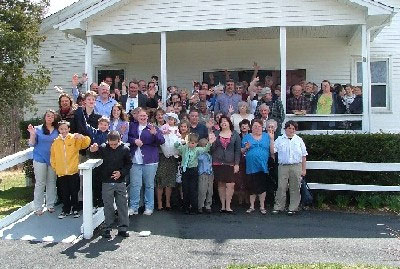 January 2008 a new chapter began for Chariho Southern Baptist Church and the surrounding communities. Our beloved Pastor Bobby Barnett and his wife Mary moved back to Arkansas to continue their work for God. Pastor Bob is not just a good man but a great man who touched so many lives over the years and will he will be sadly missed by many. Pastor Bob was the pillar of guidance, knowledge and spiritual leader of Chariho Church. So many people in the surrounding communities know of Pastor Bob even if they have never stepped foot into the church.

While we miss Pastor Bobby, we are excited about the future. God is working in our church and community in exciting and new ways. Please join us for worship this Sunday and become a part of our future.